Three weeks ago I had the opportunity to finally see in person some of the heroes from the industry that I’m working in. They have just released videos of the talks I attended so here is a recap!

This was also a great opportunity to re-unite with some old friends whom I have see only once since we moved from our hometown. Me and Kit decided that London would be a good place to meet, and Dalibor was already there. 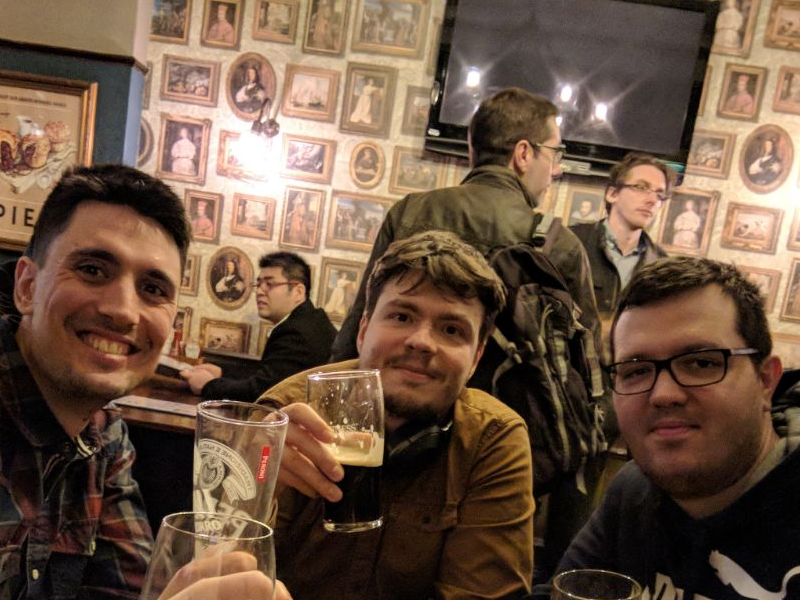 The conference itself was a source of a lot of information from various experts in the industry, so here is the list of talks that I attended with some takeaways that I could remember:

Keynote: What is programming anyway? (video)
Opening keynote was held by Felienne and it certainly brought a different perspective on how to look at programming. She also said that programmers usually live in their own bubbles, and like to protect their own thing. That’s why it might be hard to introduce diversity into some teams.

IdentityServer for ASP.NET Core 2: Overview, New Features, Enhancements (video)
I had a chance to listen to Dominick Baier few weeks before the conference, but this time he was accompanied by his colleague Brock Allen. Security is a difficult topic and I might have to listen to their talks few more times :)

Authorization is hard! Implementing Authorization in Web Applications and APIs (video)
Follow up talk by Dominick and Brock where they showcased their new project - PolicyServer. This is a gread companion product for their IdentityServer and ASP.NET Core.

Diagnosing issues in ASP.NET Core Applications (video)
Finally I was able to see Damian Edwards and David Fowler live! The slides and demos from the talk are available on David’s GitHub.

This was a really interesting talk on figuring out the right way to do async in your application, and what you should absolutely not do.

What’s next for ASP.NET Core?
Second talk by Damian and David where they showed what is coming to ASP.NET Core. Interesting thing was moving the identity code that is part of the New MVC App template to a NuGet package. They had to make some more framework changes to make this possible, and all that is part of the new release too. Another thing was IHttpClientFactory - finally the right was to use HttpClient. Since then the [official roadmap] was released(https://blogs.msdn.microsoft.com/webdev/2018/02/02/asp-net-core-2-1-roadmap/).

C# 7.1, and 7.2: The releases you didn’t know you had (video)
Initially this talk was supposed to be done only by Bill Wagner who is a member of the C# standards committee, but Jon Skeet was around so they joined forces. They talked about new features in the latest releases of C#, and mentioned some future goodness that might be coming in C# 8. Jon Skeet was mostly complaning how he is not able to finish his book if they keep releasing minor version :).

Building for Resiliency and Scale in the Cloud (video)

Probing the Mysteries of Saturn’s E-Ring with PostgreSQL (video)
I really enjoyed this talk by Rob Corney. He had an interesting story in the space domain, and he used PostgreSQL to explore that domain. He also wrote a book about it.

GitHub Beyond your Browser (video)
Phil Haack showed tools like Atom text editor and GitHub Desktop that help developers be more productive. There is more to GitHub then just a web app.

Web Apps can’t really do that, can they? (video)

Solving Diabetes with an Open Source Artificial Pancreas
Another talk by Scott Hanselman where he explains how he is basically fighting to survive using tech to his advantage. He previously blogged about it but it was great to hear his story. He even hacked his PowerShell window to monitor his blood sugar values.

Why I’m Not Leaving .NET (video)
Mark Rendle was talking about all the interesting things that are happening in .NET world right now. He mentioned an experiment of his about how to improve the performace by sending the data straight from the database to JSON stream. Another thing was compiling ASP.NET Core app to native code and get instant startup of your app. To get an overview of all that is possible to do today on the .NET platform was a perfect end of the conference.

All in all this was more then a great conference and a great start of the new year!

Spent the last few days at #ndclondon with an old friend @pootzko and we just met a new friend @shanselman :) pic.twitter.com/eNAUdlVzhy